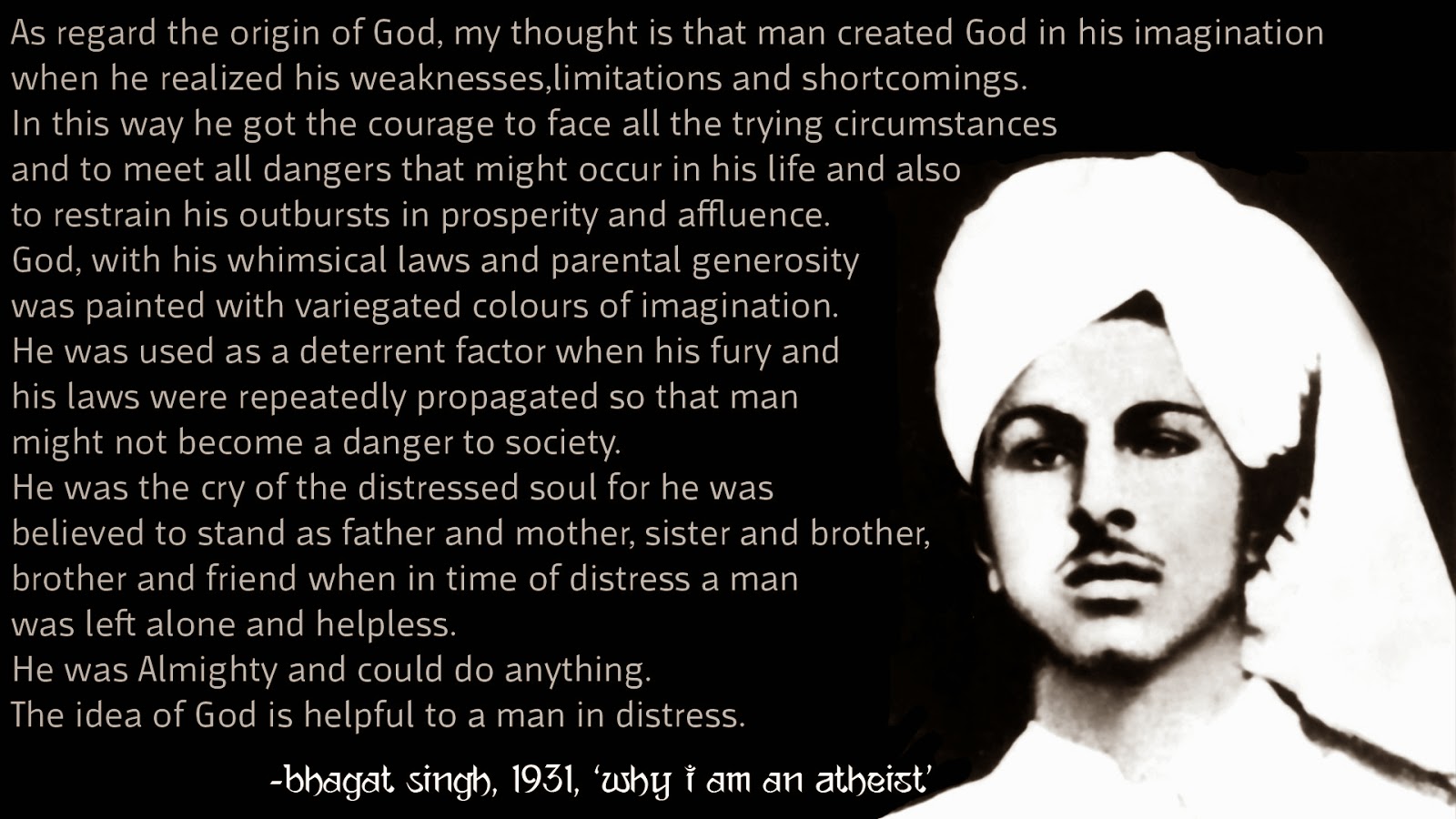 Bhagat Singh - Why I am an Atheist - Epified

They are happy with their belief. They even say things like "it's true to me" and "it's faith. It is ironic therefore that "I don't believe in God because there is absolutely no scientific evidence for his existence and from what I've heard the very definition is a logical impossibility in this known universe," comes across as both patronizing and impolite. You may change your billing preferences at any time in the Customer Center or call Customer Service. You will be notified in advance of any changes in rate or terms. You may cancel your subscription at anytime by calling Customer Service. Skip to Main Content Skip to Search. News Corp is a global, diversified media and information services company focused on creating and distributing authoritative and engaging content and other products and services.

Dow Jones. By Ricky Gervais. To Read the Full Story. Subscribe Sign In. What logical argument shows exactly what an omnibenevolent being can and cannot do? Is a billion years of suffering compatible? What about a trillion? Without a logical doctrine it makes the term "omnibenevolence" meaningless and unintelligible. And any creator god does not merely allow suffering — suffering is built into the design. God is unavoidably directly responsible for all natural suffering in the universe:. In other words you can't claim that god is the creator and designer of the physical universe, including the laws that govern it — which is what every theist insists — and not also accept that natural evil is a direct byproduct of those laws.

Natural evil cannot therefore be due to demons tinkering with god's plan. Demons would be the ones who actually created and designed the universe if that were the case. So the suffering and haphazardness of the evolutionary process gives us good reason to believe there can be no omnibenevolence and therefore no traditional notion of god which many theists say is the only kind of god that can exist. Furthermore, the fact that libertarian free will is incoherent prevents the theist from using the "free will defense" as an argument against moral evil.

Take that away, and they've got nothing. For a full description of the argument, see the Evolutionary Argument Against God. This doesn't disprove god per se, but it shows that none of the concepts of god in any existing religion can even meet the standards of greatest conceivable being, and therefore none can be god. God could command genocide and slavery, and they would be morally good merely because god commanded it. Either way, the theist has a problem. Either morality is arbitrarily decided by god, or morality exists objectively and independently of god.

The theists is in a dilemma. But — the Euthyphro dilemma is actually not the end of the conversation, because there is technically a third option. They can say god is the standard of moral values: goodness and god are the same. This third option only opens up a further dilemma. If the claims is that god is the source of the good, I can ask, " Is god good because of the properties that he has, or are the properties that god has good because he has them? How can god be good prior to being loving or kind, or having any good making properties?

So the Euthyphro dilemma really is just a starting point that terminates in a trilemma for the theist. The theist cannot attempt to ground morality in god without hitting this trilemma:. Show that morality is arbitrarily decided by god. Show that morality exists independently of god. Make a circular argument. If the theist insists that morality cannot exist independently of god, their only alternatives are to say morality is arbitrarily decided by god, or make a circular argument.

This means the theist has no logical basis for saying god grounds morality or that god is needed for morality or that the atheist has no basis for morality, objective or not. Evolution has embedded the predilection to notice patterns and to invoke agents when there aren't any, in a phenomena known as patternicity and agenticity , respectively. Our hominid ancestors lived in a world of danger, and they weren't yet the top of the food chain.

If a noise was heard in the grass it was better to assume it might be a dangerous predator than just the wind. If they were wrong, they made a false positive, that is they incorrectly thought something was there that actually wasn't, and no harm was done. If, however, they assumed it was just the wind and it turned out it was a predator, they made a false negative, that is they incorrectly assumed there wasn't something there when there was, and they likely lost their life as a result of it. So evolution has made it so that false positives are much better to have than false negatives. As I wrote in my original post , you cannot use intuition to make metaphysical principles, like everything that begins to exist has a cause.

This is why all the arguments for god fail. They take human level perception and understanding of the way the world works and extrapolate from them gigantic metaphysical principles. Science tells us the universe never began to exist in the sense of popping into existence out of nothing. Nothing never existed, and the whole history of the universe is ontologically real. Furthermore, causality is just the relationships of events in spacetime. It's not anything like Aristotle thought of it. So all variations of the "first cause" argument fail, be it the Kalam Cosmological Argument or Aquinas's unmoved mover. The argument from contingency fails because it assumes the principle of sufficient reason , and my argument above shows that brute facts are unavoidable. Furthermore, the first premise of the KCA, that everything that begins to exist requires a cause, actually negates free will.

If my actions and intentions all require causes, then they're causally determined. To say that my soul causes them only pushes the cause back one step. The Moral Argument is negated by 10 above, and although there are too many version of the Ontological Argument to mention, they all involve either claiming that if a maximally great being is possible , then it therefore must exist, or if a maximally great being is conceivable , it would be better for it to exist than not exist, and so it therefore exists.

The OA fails for a number of reasons. First, given the logic backing up the OA, if god is by definition the greatest conceivable being, then I can easily conceive of a being greater than Yahweh, or Allah, or any other conceived deity, and so therefore none of these gods can exist. The OA therefore actually disproves the god of Abraham. Moreover, the moral argument and the ontological argument are incompatible with one another. If god is the standard of goodness by which all moral truths are measured by, then to use that same standard to measure the criterion by which we determine what a maximally great being is, it makes the ontological argument totally circular. God is being presumed in order to determine what is god is. Otherwise, how would the theist arrive at the idea that being all-loving is maximally great?

And what standard would they be using to determine what an all-loving being can and cannot do? This would all have to be determined without presupposing a standard that is ontologically grounded in god, and would thus have to exist independently of god's existence. Those are the most common and the most sophisticated arguments for god that exist. For refutations of Thomistic arguments, see here. If there was indeed an all-knowing creator who revealed himself, why would he do it in such a way that contained all the ignorance extant of that time?

Why not include a few detailed verses about something like evolution, DNA or germs which no one knew about at that time? The excuses I've heard for this vary and are all laughable. Some theists say for example, that god wouldn't to give us too much evidence, because then we couldn't reject him. So god purposely makes his revelations ridiculous and unbelievable to test our faith? This is just an apologetic attempt to make the religion unfalsifiable by arguing that the less evidence we have and the less plausible it sounds, the more it's got to be true.

It's not worth any intelligent person's consideration. I've outlined 13 good reasons why I'm an atheist above. Many of them are unique to me, and perhaps, never been argued before. I am confident that each is true and that together they make an awesomely powerful case against theism that goes far above and beyond a reasonable justification for atheism.

Argument 1 by itself is enough to justify one's atheism. Combine that with arguments and you have what I see as an irrefutable case that there is no god, and that naturalism is true. When theists complain that atheists are incapable of bearing any burden of proof, they've never been to my blog. Atheists are certainly capable of making positive arguments for atheism, and this blog post is the proof. Posted by The Thinker at PM. No comments:. Newer Post Older Post Home. Subscribe to: Post Comments Atom. Share Tweet. Search This Blog. Subscribe To Posts Atom.

Comments Atom. This blog is about exploring atheism through contemporary urban living. I live in New York City, the secular metropolis, and I have an avid interest in all things religion, science, philosophy, politics, and economics. I am an atheist, a humanist, a philosopher and a thinker, and the purpose of Atheism and the City is to write about my thoughts and experiences on the subjects and topics that I have a passion for.

Feel free to respond to any post whether or not you agree. View my complete profile. My Blogger Role. Atheist Revolution. Mark your calendar!