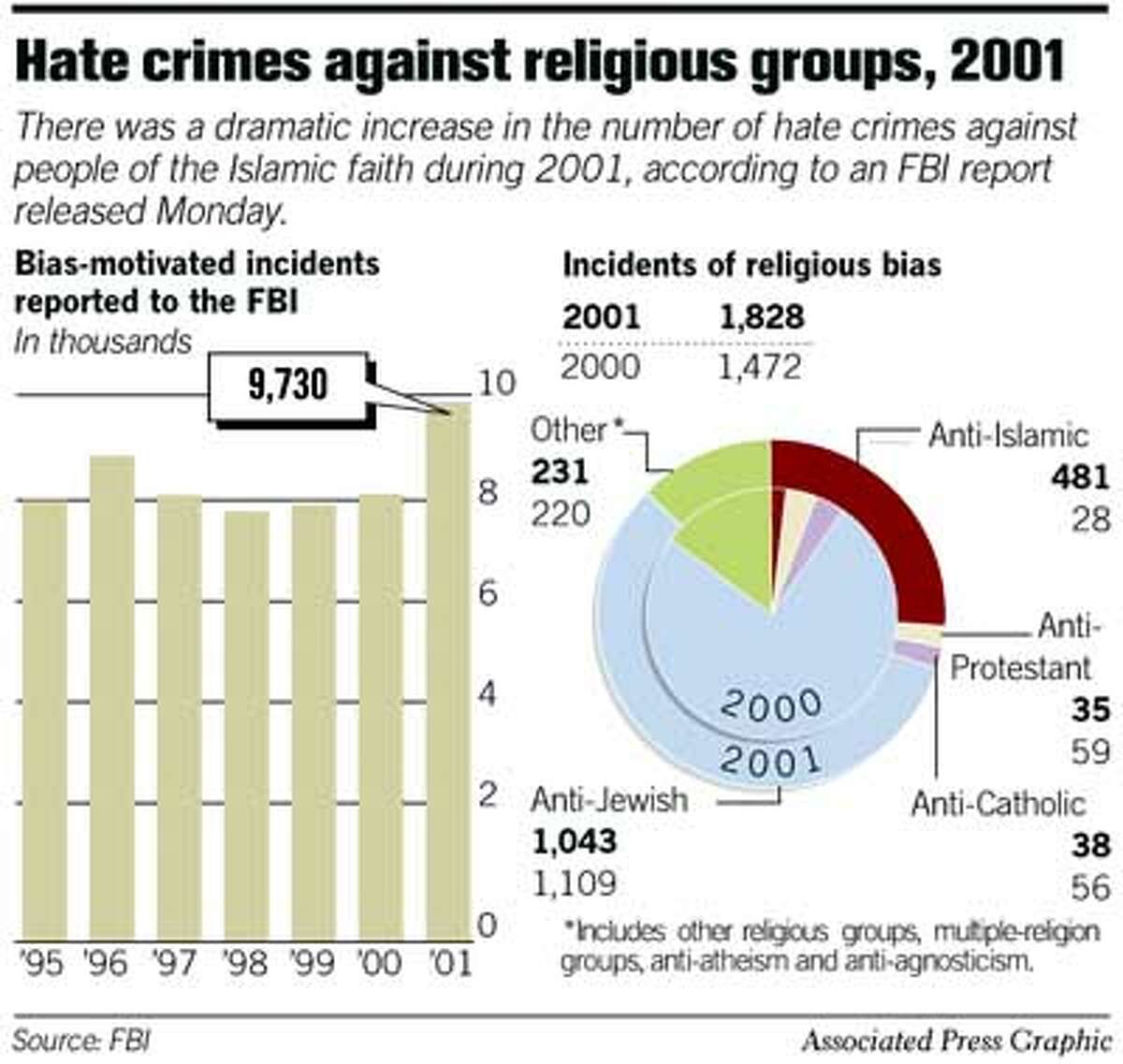 Anti-Muslim hate crimes on the rise in the US

This has been deliberately completely omitted from the report, and the data is deliberately skewed to deceive readers into thinking that anti-White hate crime is a much smaller problem nationally, which is not true. This includes grooming gang victims. This has the effect of disproportionately inflating the suffering by implied false statistical comparison of Muslim hate crime victims. The report hides the fact that the weighting of anti-Muslim hate crimes is only 0. The report says that data for anti-Muslim terrorist attacks is included as hate crime including Finsbury Park Mosque attack , but not the data for religiously aggravated attacks carried out by Muslims against people perceived to be non-Muslim including Manchester Arena Bombing.

The report hides the fact that the worst ethnic group weighting for convictions of hate crime in is Black 0. This choice of data presentation shows racial discrimination that attempts to make White perpetrators look like the most likely race to commit racially or religiously aggravated hate crime offences, which is not true. Black perpetrators are. Only 0. When multiple sexual offences are prosecuted as racially aggravated, they are often only charged as one single rape. So rapes counts the same as one hate speech hate crime. This is unfair. These practices are discriminatory, unfair and unlawful. It is deeply concerning to discover that the top public body that has been tasked with the responsibility of defending the British public , has been deliberately covering up attacks on British people.

It is defending our perpetrators, and hiding the statistical evidence of their crimes against us. The Hate Crime Unit has deliberately acted to thwart the ability of the Government to respond appropriately to grooming gang crime. The Home Office must take the following action to reform their Hate Crime practices:. However, it has to be taken into consideration that many acts of anti-Muslim hate are directed towards those who the perpetrator believes to be Muslim. This was followed by the arson of a Sikh temple in New York by teenagers who mistakenly thought that the temple chief, Gobind Sadan, was named after Osama Bin Laden.

There is a growing literature on the experience of hate crime by Muslim women due to the visibility of their hijabs, niqabs or coverings. Sikh men can also be understood as being highly visible due to their wearing of the dastar, the turban, which many perceive as being as sign of terrorism due to the head covering worn by Osama bin Laden in many of his videos from the s. This misguided connection has resulted in a number of Sikh men being targeted. Moreover, it is not exclusively Sikh men who are victims of this type of Islamophobia, it is all those who are believed to look Muslim in the minds of the perpetrator as they believe all those who are Asian, are also Muslim and therefore a valid target of anti-Muslim hate.

Whilst the perpetrators of these hate crimes believe they are justified in their acts of retribution, they have limited knowledge about the group they believe they are targeting. This victimisation of non-Muslims creates a discrepancy in the initiatives used to tackle hate crime. Within the Sikh and Hindu communities, the comparative lack of resources or initiatives to promote awareness of hate crime, or to cope with victimisation is a key issue — with some feeling that their community is invisible. Whilst there have been a handful of government and council-lead projects which have aimed to address this imbalance, they have not trickled down to the community level, as many within the communities are unaware of them.

Many consider these efforts to be tokenistic, especially when they involve superficial meetings of different congregations, or projects such as Hate Crime Awareness Week as they have no lasting impact and are one off events. The result of this is that the Hindu and Sikh communities, as well as those who are non-religious within the Asian community, are unsupported in their hate crime victimisation, and increases the sense of alienation. Their places of worship are not as connected with local hate crime initiatives, and are not covered by the Muslim organisation TellMAMA , or the Jewish Community Security Trust CST , both of which deal with hate crime victimisation and awareness within their communities. This disparity between the resources given to these different religious communities creates a level of resentment between them.